Jackie Kelm founded Appreciative Living in 2005 and is the author of several books. She has helped thousands of people live happier lives with simple exercises based on neuroscience and Appreciative Inquiry. In 2013 she developed emotional flatlining (anhedonia), and was able to overcome it by studying neuroscience more deeply. Below is the story her journey.

It all began in February 2013 when my dermatologist found melanoma on my leg. She caught it early, and it was removed with no problems and no stress. All was fine the first 2 days after the surgery.

On the third day my leg started to look red, and soon it was clear an infection was starting. I called the doctor who prescribed antibiotics to stop it.

On the fifth day after surgery the infection was getting worse and my leg was beginning to swell, so I was put on stronger antibiotics and started going to the doctor daily for antibiotic shots. This is when things started to go south, and as I look back, I realize the anhedonia was kicking in.

In the morning the doctor had drawn a circle around the edges of my infection, telling me she was very concerned, and that it should be much smaller by tomorrow after my second shot of antibiotics. The only thing I remember caring about was the fact she had drawn on my skin with a thick permanent black marker.

I went home and laid on the couch in our family room because the pain was excruciating when I moved my leg, and it made it easier to crawl to the bathroom. I stared up at the ceiling for the most part of the day, having no interest in even watching TV.

Nightime came and the moon was full. I woke up in the middle of the night with moonlight streaming through the window, shining right on me. I peered down at my leg and saw it had expanded well beyond the black lines drawn by my doctor.

I wondered if I should call an ambulance or at least wake my husband up. I did neither.

I just stared at my leg, and then stared out the window at the moon. I was disturbed, but not about my leg. I was disturbed by the sinking feeling I had that I just didn’t want to live anymore. It came right out of the blue. A week ago I was perfectly happy in my new home. I could not begin to understand what was going on.

My Dad had passed away three months earlier, and all of a sudden I felt like I could feel him in the moonlight.  It was so comforting, and I wanted to be over there with him. It wasn’t like I wanted to kill myself, I just simply didn’t want to be here on the Earth anymore. Life just felt pointless.

So I waited till my husband got up the next morning and he got the kids off to school, and then we went to the doctor who sent us immediately to the emergency room. By this point the weight of a bed sheet on my leg sent me reeling in pain, and my leg looked like it would explode red fire works everywhere.

The surgeon opened the infection at my bedside, which was the worst pain I’ve ever felt in my life including two child births. We all thought things would get better from there, but unfortunately nothing much changed.

The doctors could not identify what was causing the infection, so they didn’t know which antibiotics to use to treat it. So they gave me the strongest of everything they had around the clock through an IV.

At one point in the hospital they told me the infection was not responding as well as they hoped, and I could lose my leg, or the infection could enter my blood and I might die. “Oh well,” I thought.

I really didn’t care. And that’s what bothered me the most. How could I not care if lost my leg or died? I had two kids at home – at least I should care for that reason alone. What the heck was going on with me? I had refused all pain medications, so it’s not like I was in pain-killer la-la land.

Little did I know that my emotional flatlining (anhedonia) was in full swing by this point, which I can now see as a blessing in some ways. Instead of being concerned and stressed about my dire situation, I was fine. I slept well. I wasn’t worried about anything, except the fact I wasn’t worried about anything. I couldn’t for the life of me figure out why I didn’t care more about what was going on.

My husband brought my favorite books and my computer to the hospital, as I always have at least 4-5 books going at one time. But I never read a page. I didn’t open my computer. I didn’t even watch TV. I just stared off for the most part.

We just moved and didn’t know anyone in the area, and my husband had to take care of the kids at home, so I was pretty much alone each day other than an hour in the evening if he could make it up. It was fine with me because I didn’t really want to talk to anyone.

After 7 flat days in the hospital the infection started to respond and I went home. I couldn’t care less. I spent 4 more weeks on bedrest giving myself IV antibiotics each day through a special tube they inserted in my arm.

The night I came home from the hospital was particularly disturbing. It was a Normal Rockwell moment on the beautiful back patio of our new house. My husband Jon was grilling steaks and I had a nice glass of wine in my hand for the first time in 2 weeks. My daughter and son were sitting with me, the cat was sleeping quietly by, and I paused to realize this is one of those rare moments when time seems to stop and you want to capture it. But not in the way I had hoped.

I started sobbing and hobbled into the house with my walker. It wasn’t because I was touched by the moment, it was because I couldn’t feel the moment. I could not feel the closeness with my family. I could not feel any connection with the cat. I didn’t care if I ate steak or hospital food. I felt completely flat as I had throughout my entire hospital stay.

But then again I could feel. I could feel sadness. It seems I could feel negative emotions which were dulled, but none of the positive ones. Something terrible had gone wrong and I had no idea what it was.

My husband came in after me and asked what was wrong. I hesitated, and stammered honestly that I didn’t want to live anymore. I had been laying in the hospital for a week and lost all interest in life.

He knew I was serious. This wasn’t some call for attention. I wonder to this day how he could be so understanding of what I was going through. He said the perfect thing I needed to hear which may sound disturbing, but it was, “You don’t have to stay here for me and the kids. We will be ok.”

In all my life I always wondered how anyone with kids, especially a mother like me, could ever be so selfish as to end her life and do that to her kids. Now I understand. I had no intentions of acting on it, but I wished I could just magically evaporate and cease to exist.

You hear the cliché that it’s the small things in life that bring joy, and I’m here to tell you it’s absolutely true. And anyone with emotional flatlining or anhedonia knows this as well. As much as you may love your kids and your spouse and family, it’s not enough if there is no joy in your life.

Jon went back outside and I stayed in the house and cried for what seemed like an eternity. I thought to myself, “What in the world is going on? Two weeks ago I was one of the happiest people I knew. I was an expert no less, who had overcome years of depression and written two books and helped thousands of people get happier. And here I was, so low and desperate I wanted to end it all. It made no sense whatsoever.

The next day I got up and began my flat life of bedrest for the next 4 weeks. I couldn’t drive or do anything, so once again the anhedonia was a bit of a blessing. I had no interest in doing anything, so laying in bed was perfect. That’s all I did the whole time. No reading, very little TV, no computer, nothing.

Several times I reflected on my complete loss of interest in everything, and talked it over with a few close friends. We chalked it up to having a mid-life crisis since I had just turned 50, combined with the fact my father had recently died, and we just moved. I so wanted to believe they were right.

But I knew deep inside something was very wrong and this was no mid-life crisis. Personal growth and reflection was my life’s work and I could not pull myself out of this. Not even a little bit. I couldn’t even do a simple appreciation exercise with any success. It actually made me feel worse.

Four weeks later when I could finally get out of bed and do a few things, it confirmed that something was profoundly different in a bad way. No matter what I did, I could not feel any positive emotions at all.

I looked at flowers in the store but I couldn’t feel their beauty. Nothing. I nervously played “Amazing Grace” by Judy Collins, which is so beautiful it often brings me to tears when I hear it. Nothing. Couldn’t feel a damn thing.

What the heck had happened to me?

I had cleared my schedule for the move and surgery, so thank goodness nothing was pending. I had lost all interest in my Appreciative Living business,  but worst of all, I felt like a fraud. Here I was, “The Joy Engineer” of all things, who could not feel joy! It was the ultimate irony. Really, you can’t make this stuff up. How in the world could I lead a workshop or write an article, or tell anyone how to find joy when I was in the depths of despair? I hid out as best I could and made myself unavailable.

Several more flat months went by. I decided to try again and do a few of the core appreciative exercises I had done for years that worked for me and thousands of others to get happier. I attempted the classic appreciation list but could not feel the emotion of gratitude, and it actually made me feel worse. I tried to picture what I wanted in the future,  but I couldn’t. I didn’t want or care about anything now or in the future.

My life was completely flat and pointless. Everything I thought I knew about creating happiness wasn’t working.  I couldn’t understand what was happening to me. I didn’t know what to do. And at the same time I could care less.

Click here: home page to read the rest of my journey and how I finally overcame emotional flatlining. Or,  If you are looking for help in dealing with emotional flatlining, please sign up for the free report below, and visit the support webpage at Support Program. 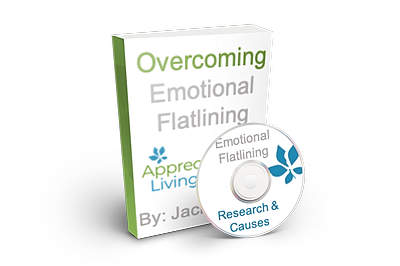